Dr. W. Edwards Deming is famous for his work, especially from the 1950s when Japanese industry invited him to help them build and refine the core components of post-WWII Japanese business. Many areas of the Japanese economy worked together, in collaboration rather than competition, and built holistic systems to manage their value streams. Toyota, the Toyota Production System (TPS), and “Lean” thinking were significantly influenced by Dr. Deming. 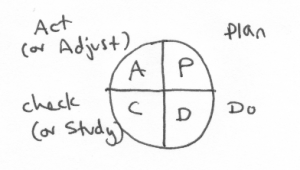 If you’ve been through any training that mentions process improvement, you have probably seen “the Deming Cycle,” or the “PDCA Cycle:” Plan, Do, Check, Act. (I prefer to say “Plan, Do, Check, Adjust” to be clearer on the last step, and Deming in this book says “Plan, Do, Study, Act”.)

Being a process improvement person, I wanted to read source text from Deming, and a few years ago tried to read The New Economics for Industry, Government, Education. At that time, I really didn’t get it. Deming’s writing style in this book is unusual: he is very casual, and covers a broad range of topics–some in extreme detail and some in broad strokes. This year I tried again, and the book really made sense to me! I don’t claim to be a Deming expert: all I’m saying is the ideas make much more sense to me this time.

There are ten chapters in the book:

Here are my primary take-aways:

Collaborate within a system

Deming uses the word “system” in a VERY BROAD way. All of higher education would probably be one system for him, including all the stakeholders in the system: high schools, universities, colleges, community colleges, the federal government (e.g. for financial aid and grants), state governments (e.g. for publicly-funded institutions), students, professors, staff, alumni, parents, &c.

Within a “system,” it’s better to collaborate rather than to compete. Competition benefits one party at the expense of the whole. For example, if you sell one kind of widget and another company sells a different type of widget, you could “cross-sell” your competitor’s widget to your clients. Collaboration opens up additional value to be captured. Along these lines, Deming (as far as I read him) does not have a problem with oligopolies and monopolies as long as they consult with consumers.

Although working with your traditional competitors might be a stretch for you, at least consider that competition within one organization is counter-productive. One department could could “lose” but that could be best for the overall organization. Deming’s example was a travel department: the travel department might “win” in that it finds the cheapest flights, but the whole organization loses because the salespeople are too tired from their red-eye flight to make a sale.

On this topic, I feel higher education is in a good place compared to the for-profit sector because we have a natural inclination to cooperate with other schools.

People want to do a good job, but extrinsic rewards discourage them from doing so

To the first point: one area can appear to be performing superbly because something outside their control changed: customers have been given more money to spend, for example, or an upstream process changed. People are rewarded for their performance but it is difficult to extract what they were responsible for vs. the rest of the system.

To the second point: Deming believes that people have an innate drive to want to excel, and to do good work, and that work is rewarding in itself. I heard on the Lean Blog podcast that Deming would begin workshops asking why people were there–and then he would say he was there to learn, and to have fun. Extrinsic rewards (assessments, pay for performance/grades) create a relationship that sends the signal you should do good work because you will be recognized, rather than doing good work because you want to do good work.

Information is not knowledge and information does not predict the future

Many people think that you can model information and it will predict the future. Generally speaking, this is not true. For example, at Fusion 2011 Daniel Burrus noted that if you modeled the number of Elvis impersonators over time in the 1960s and 1970s, by 2000 one out of every three people would have been an Elvis impersonator.

Deming uses the word “knowledge” to mean a predictive ability. Knowledge about birthdays might be that birthdays recur once a year: the best place to predict tomorrow’s birthdays based on historical evidence is to look at tomorrow a year ago.

You can gain knowledge in many ways. One way is that you can turn information into knowledge when the process generating that information is under statistical control.

Statistical control, common causes, special causes, and how to improve

Once those boundaries are in place, expect variation within the upper and lower limits! If your limits are 15 minutes and 40 minutes, there is no meaningful difference between the drive taking you 16 minutes and 39 minutes! You can validate the data points are “common causes” but beyond that do not tamper with the system based on data points that are within the control limits! Do not create audit sheets or additional paperwork to try to mitigate this variation or “inspect in” a higher level of quality than the process can provide. Focus on the process itself to change the control limits.

However, if there is data OUTSIDE the control limits (e.g. a 50 minute drive), you should look at each of those data points to determine if (a) your limits are incorrect or (b) there is a “special cause” for that data point. Maybe a lane of traffic was blocked that day, or there was an accident. You can create workarounds and otherwise individually address special causes.

If you are unhappy with the control limits for your process, you have to look at the process itself. You can try to (1) tighten the upper and lower limits or (2) move the average upwards or downwards. You do this by looking at the process itself rather than specific data points.

Short version of this section:

2 thoughts on “Reflection on the book “The New Economics” by Dr. Deming”