A logical fallacy is a logical hole in an argument. In many cases people do not see their own logical fallacies. (To this point, the former CEO of BB&T, John Allison, had management teams take logic quizzes to identify holes in logic and to ensure that teams did not all share the same logical holes.)

One pernicious logical error I regularly see is in not thinking through the advantages and disadvantages of the current situation vs. a proposed future situation. There are four aspects to consider:

For example, if deciding whether to buy a computer:

You can then weigh all four of these things against one another to make a balanced decision.

I regularly see one-sided decision making in this situation: two approaches that I’ll call “I don’t want to do it” and “I really want to do it.”

I don’t want to do it

In this situation, whoever is deciding doesn’t really want to do the thing (either consciously or subconsciously). So, they use the following approach:

This appears to be a balanced argument, but it only sees half of the problem. Or, you’ll see the opposite:

I really want to do it

For whatever reason, the decision-maker really wants to do the new thing (consciously or subconsciously). So they instead use this approach: 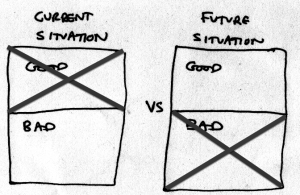 And using the above example they would say, “the current computer is slow and a new computer has 64-bit support.”

This isn’t balanced decision-making either.

Addressing this type of one-sided decision-making is challenging for a few reasons:

When possible, identify whether people are aware of the hole. You can do this by bringing up one of the components–such as “well, a new computer have 64-bit support even though it costs money.” If the decision-maker listens and incorporates this thinking, you may be able to list other examples and make a better argument in that case. If they brush off the argument, this may be a sign that they have already made up their mind.

Sometimes you can also find other stakeholders who might be better able to influence the decision-maker: someone that can talk with them after hours or in private, for example.

Or, if you’re facilitating these types of discussions you can consciously build a chart like the above to ensure a complete understanding of the opportunity.